Located off the coast of Spain, just south of Barcelona, is the stunning island city of Palma de Mallorca. When visiting during your European cruise with Carnival®, you’ll find plenty to do here. From admiring the architecture to exploring the Medieval streets, it’s also an ideal spot for a quick bite to eat while your cruise ship is docked.

Mallorcan cuisine takes cues from the peasants who learned how to survive in an isolated environment, as well as the different groups of people who ruled them. The cuisine features an array of ingredients and flavors you find in other parts of the world all in one spot. Look for and try our selections for the top 15 things to eat in Palma de Mallorca when visiting. 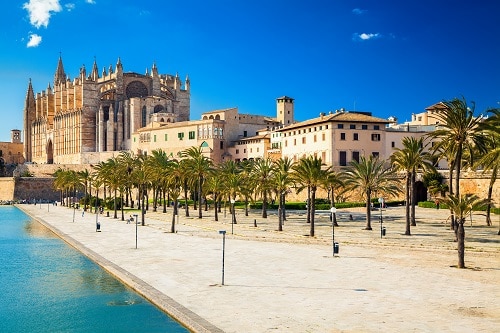 Frit Mallorquí is a traditional dish that dates back centuries. It’s like a hash made from offal—liver, blood and lungs—and local vegetables like potatoes, tomatoes and peppers. Each ingredient is chopped and fried together with garlic, olive oil, cinnamon, chilies, black pepper and bay leaf.

Don’t let the name fool you. This version of dirty rice is a rich and delicious blend of meat and vegetables that changes with the seasons. Common ingredients include sobrasada (cured sausage), rabbit, wild mushrooms, nutmeg and saffron. It’s not paella, though. The dish has a consistency more like soup seen in the regional Caldoso style of cooking.

Mallorcan-style snails aren’t like the escargot you enjoy in France. Local recipes call for snails boiled in water seasoned with fennel and mint, which gives them a distinctive flavor. Dip caragols in aioli, the garlicky mayonnaise that’s Spain’s most popular condiment for just about every dish. 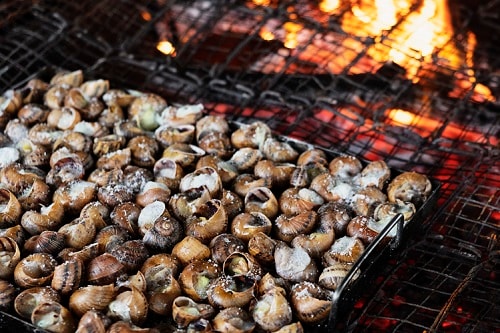 Whether you like sweet or savory pastries, you’ll find something that suits your taste buds in Palma’s bakeries. Panades—freshly baked pastries stuffed with piping hot fillings of meat and vegetables—are a staple during the Easter season. The flaky, buttery crust makes the perfect casing for eating on the road with a view of the sea.

You can spot cocarrois from a distance just by looking at the distinctive pinches along the seam of this pastry. This Spanish version of an empanada is a vegetarian dish stuffed with vegetables, raisins and pine nuts. Best of all, they’re baked—not fried—so you can feel free to eat a second or a third.

If you only have time or room in your stomach for one Mallorcan food, you have to try ensaïmada. This sugar-dusted pastry has a croissant-like texture and a distinctive flavor that’s the result of the island’s humid air and generous amounts of pork lard. It’s light, flaky and—according to people who’ve tried it—addictive. 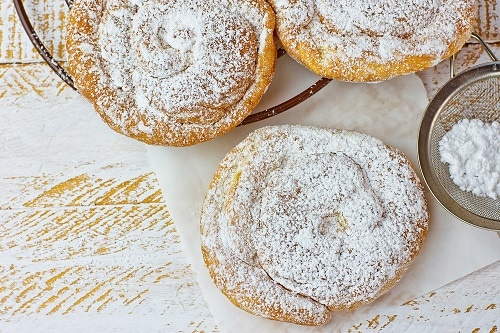 Like in other parts of Spain, Mallorcan cuisine uses plenty of fresh, local ingredients in simple combinations. This is certainly true of llom amb col which literally translates to “loin with cabbage.” The loin is a combination of pork loin and sausage wrapped in a cabbage leaf. It’s then stewed in a tomato sauce seasoned with pine nuts and raisins.

Toast topped with crushed tomatoes and olive oil is a staple tapa in Catalan cuisine, and it also makes an appearance in the Balearic Islands. It’s a simple snack made from local ingredients, including tomatoes plucked from the vine, olive oil and flaked sea salt. For a more robust snack, top it with slices of ham, anchovies or cheese.

Valencia has paella. Palma de Mallorca has fideuà. This classic dish has a flavor profile similar to paella, but it features short noodles instead of rice. The noodles cook in limited amounts of broth so they never get too soft and can absorb the flavor of the seafood. Just be sure to have bread on hand to get every drop of the garlicky broth. 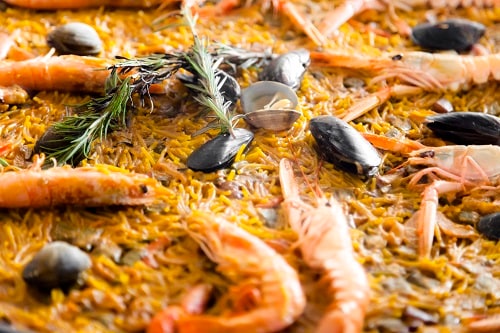 Seafood is prominent in Mallorcan cuisine, and you’ll find everything from fresh fish to prawn and squid on menus across Palma. Pica Pica is a simple dish with nothing more than stewed squid and tomato sauce seasoned with garlic, paprika and a bay leaf. The limited list of ingredients lets the flavor of the squid shine. If you love seafood, try this.

Easter—and the week leading up to it—is an important holiday season in the city and countryside. The celebration includes crescent-shaped pastries called rubiols. Fortunately, you can find them year-round in bakeries across the city. Popular fillings include cottage cheese, jam, sweet pumpkin and even chocolate.

Sobrassada is a spreadable sausage found almost exclusively in the Balearic Islands. It’s distinctive flavor and red color come from the generous amounts of paprika and locally grown red peppers used to season the bits of pork. Spread it on coca—a Mallorcan flatbread—or toast for a flavorful and classic lunch in Palma de Mallorca. 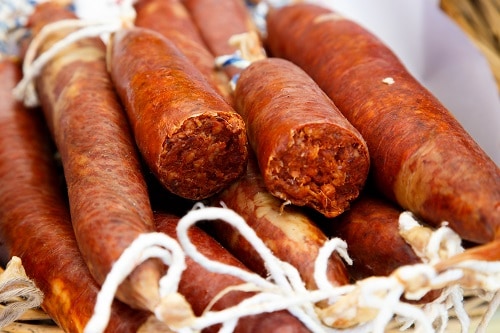 Palma de Mallorca may be on an island, but it gets chilly in the Tramuntana Mountains. When the temperatures dip, the locals warm up with a bowl of sopas mallorquinas. The ingredients of this thick soup change with the seasons, but typically include cabbage, beans, onions and pork seasoned with paprika.

Derived from an ancient grain, xeixa flour is the foundation of a popular dough served all over the island. The locals call it coca, and when it’s topped with finely diced onions, bell peppers and tomatoes, it’s Coca de Trempó. When fully loaded with meat and seafood, it becomes Coca Mallorquina. You’ll call it delicious.

Tumbet is, perhaps, the best example of the Catalan influence in Balearic cuisine. Similar to French ratatouille, this simple dish features fried vegetables—think eggplant, peppers and potatoes—and tomato sauce baked for hours in the oven. It’s a rare treat for vegetarians, and vegan options may also be available. 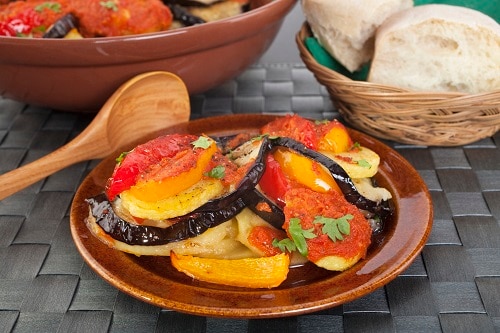 If your cruise around Europe stops in Palma de Mallorca, you’re in for a culinary treat. Let your taste buds take you on a trip through a diversity of flavors to discover the wonders of the island’s historic culture.